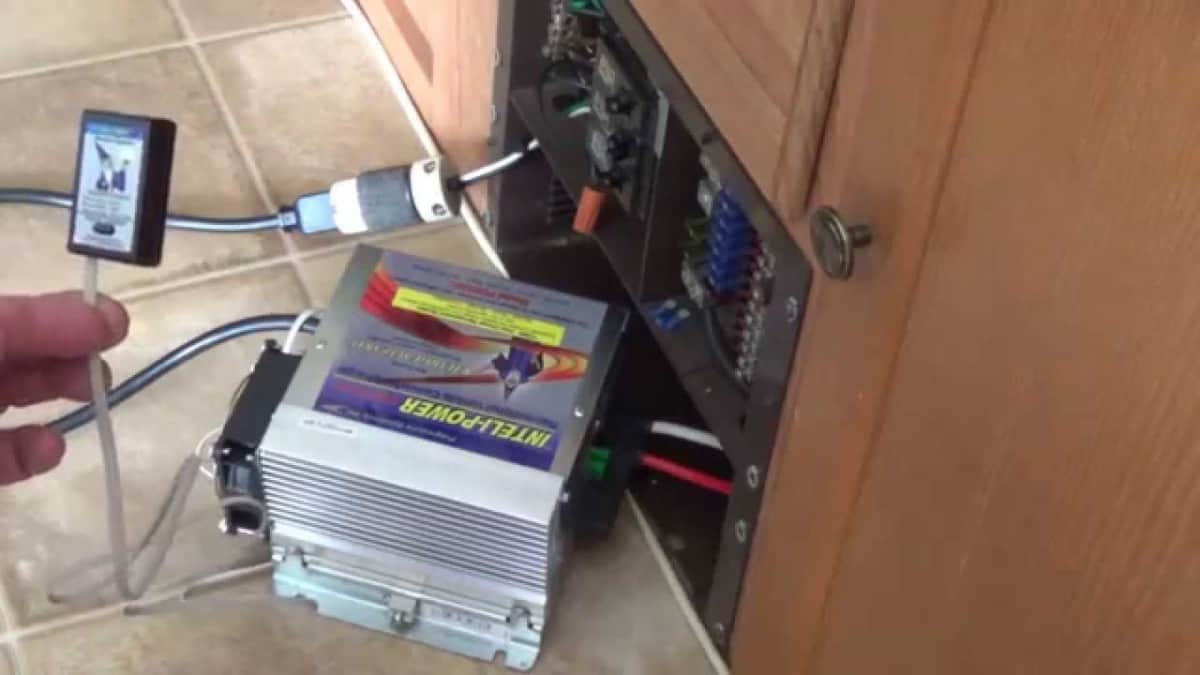 An RV power converter is an electrical device that adjusts direct current (DC) voltage output either up or down from the input level.  Often called charge controllers, these DC-to-DC converters can maximize the energy harvest for photovoltaic systems and help regulate the amount of DC energy running through the system. A Power Converter in an RV can slowly burn out depleting the power in your Battery system but will give you some clues as it happens. How do you tell if an RV Converter is Bad?

What Does an RV Converter Do

A Converter is used to switch AC power to DC power.  RV systems have converters built into them so that you can charge your vehicle’s battery while you’re parked at a campsite plugged into their electricity called Shore Power. There are many different types of converters but the one that is used in an RV is known as a controlled rectifier.  This is because the process of converting AC to DC power is called rectification. (110 Volts AC – alternating current) to battery power (12 Volts DC – Direct Current).

Other types of converters include DC choppers, AC voltage regulators, and static switches. A fully controlled or half-controlled rectifier is used to generate the DC voltage for the inverter. In addition, the input rectifier acts as a battery charger. Converters on average cost between 100 and $200 dollars. The main reason your RV needs a power converter is:

A common problem that happens with RV Converters is that they burn out and stop working which will deplete the batteries on your power system so the AC appliances will operate if you’re plugged in with Shore power but the devices that are using DC current like fans and lighting won’t which indicates that the Converter is not operating or just is inadequate for amounts for normal functioning of the 12-volt DC electrical system.

A battery that is in good condition and is maintaining a consistent charge should read between 12.5 to 12.7 volts. If the battery reads anything less than 12.5 Volts, it is a sign that it isn’t holding a charge or needs to be charged.

Where is the Power Converter In My RV To tell if the Power RV converter is bad, you will start to see warning signs. Your interior lights are the easiest indicator. If you start seeing your lights dimming, your converter could be in trouble. Other signs would-be your electronic devices do not work as well.

Another indicator is your refrigerator has a hard time maintaining its temperature. When your vehicle is in a parking mode and connected to utility shoreline AC power, your incoming current of 110 volts will be powering all your Alternating Current (AC) devices and 12 volt DC (Direct Current) devices through a converter (as well as RV batteries in order to keep them fully charged).

A third indicator could be your devices won’t work because the outlets are not getting the proper amount of electricity. Most people use professional RV repairmen to diagnose and repair electrical systems but if you think you are up to the task it’s not as complicated as it seems.

A good rule of thumb is to always remember, that all devices or appliances that use 110 volts are on breakers while all devices that use 12 volts from the Batteries are fused. In most cases, the RV has a Breaker cabinet or load Center much like the one you have at home. Inside the cabinet, the breakers should be marked what each breaker and what device is fused, and of course the Main Breaker most importantly should be marked. Very often converter is simply placed BESIDES THE BATTERIES which does make sense, considering that it is supposed to charge them

Make sure and isolate that proper power is coming in at the Main. Keep it simple then move on to the breaker flipping them to check their condition. The rest of the testing is using minor knowledge of basic electricity by checking the voltage from the source to the device. If you are not up to that-Get someone who is!

If the breaker is tripped for the outlet where your RV Converter is plugged in then this would indicate a short in the device. Watch this video where this professional swaps out the Converter. It’s very easy and the best way of relieving the problem.

Safety is everything and if the breaker is tripping on the Converter then a couple of hundred bucks is well worth the price of not going any farther and just getting rid of it. Swap it out and install a new one. Before you do, run a few tests here to see if the Converter is failing for other simpler reasons like a fuse or maybe a GFI that could be an easier fix.

One really good video I found here on YouTube on testing your Converter in your RV is a simple test that can give you a visual on the charger for the RV’s Converter: This simple troubleshooting takes just minutes to perform as long as you have a good quality DMM (Digital Multi-Meter). You use the test leads on the 12v lugs of the distribution panel in the camper or on the camper’s battery.

There are also instances where one bad battery will draw charge from the normal batteries, and then cause these to fail at the end. It is recommended that you inspect the batteries individually, to determine if they are fully charged. The recharging ability of these batteries should also be inspected with the aid of a multimeter, to determine if any of them are losing charge over time.

If you are looking for a reliable Multi-Meter with a big clear digital readout there is no better meter than Fluke 77-IV Digital Multimeter  If you are working on Solar Power Systems there are 1000 reasons for buying a Multi-Meter. In the world of Batteries, AC, and DC power you need a Voltmeter that is trusted as the best and used in all industries worldwide. There’s one in my toolbox and anyone that works with their hands has one.

Finally, when you swap any piece of equipment for your RV or Camper you need a device that will last. A Converter is one of those devices. Amazon has one called Progressive Dynamics PD9260CV Inteli-Power 9200 Series Converter/Charger with Charge Wizard – 60 Amp with Reverse battery protection prevents damage from the improper battery lead connection and Low line voltage protection protects the appliance from damaging low voltage irregularities for smaller devices like phones chargers and USB connections.

Before I leave I wanted to add a really cool video that simply directly tests an installed Power Converter: Where is the Power Converter in my RV?