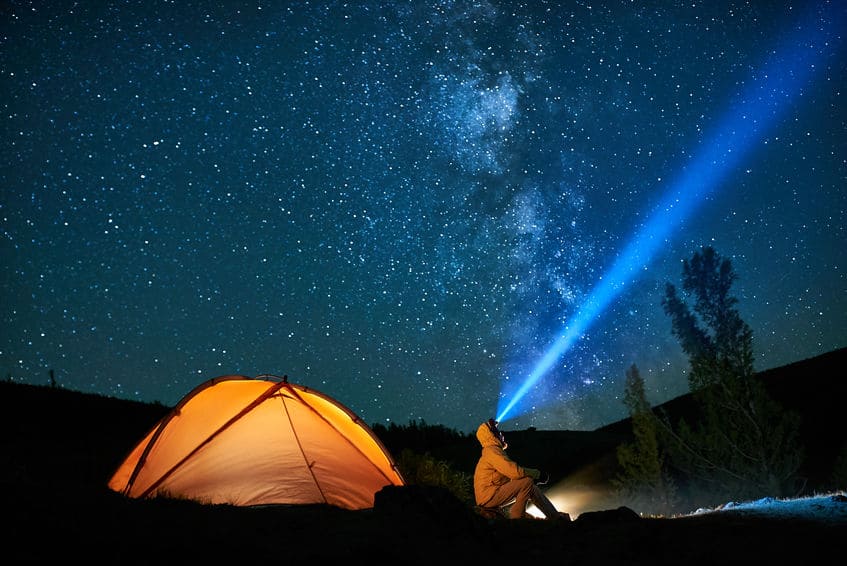 For all practical purposes, a Survival Flashlight can be your best friend if you’re lost out in the wilderness for some reason without any other source of battery power. Without light, you could be in trouble. What is a good rechargeable emergency flashlight?

Whether you are camping, hiking, or participating in any outdoor activity, even for emergencies in your home or car, there has never been more selection of Flashlights that don’t depend on batteries.

Solar Flashlight– The most important benefit of a solar-powered flashlight is that the user won’t have to replace batteries. You can keep it in an emergency kit or in a knapsack.

Solar-powered Emergency Flashlights are very useful in remote areas off-grid where no other source of electricity is available except solar power which is readily available. Some can contain as much as 1000 Lumens which is considerable watts.

Solar flashlights are extremely versatile solar products, and as such, there is a lot of variation among them. Solar flashlights can be just as bright or as dim as any other flashlight. In general, flashlights that have the option to be powered by a crank are less bright, ranging from as little as 50-100 lumens. When looking for the best solar flashlights out there, we considered a number of factors, such as:

Emergency Rechargeable Flashlights should be rugged and waterproof and once charged should last the night or be about 5-7 hours long. My first Solar Powered Flashlight was the Patriot Flashlight which also included tools Flashlight including the hammer point to break car windows, compass, emergency strobe, and siren. It contains an optional USB charger.

The Patriot Flashlight is ergonomic, lightweight, and superiorly durable, and has up to 800 lumens and a 1095 meter lighting distance, and fully charges by sunlight in 4 hours. With its own Charge Bank can power cell phones. I love it so much that I bought all the boys in my family one for Christmas.  LISHUI Portable Solar Power COB LED Outdoor Camping Flashlight,

A Hand-Cranked Emergency flashlight uses your own energy from muscle power and converts it into electrical power and then visible light with no help from batteries or Sunlight. If the sun is out these small crank-style Flashlights come in both a hybrid form to power it up.

QERNTPEY Multifunctional Flashlight Hand-held Charging Inspection Light with Portable Power Portable Searchlight for Fishing Camping Boating Hiking and a great Survival tool to have put away in the rest of the survival items you may need someday.

Dynamo or sometimes called a Squeeze Flashlight is an Emergency Flashlight or pocket torch which generates energy via a flywheel. The user repeatedly squeezes a handle to spin a flywheel inside the flashlight, attached to a small generator supplying electric current to an incandescent bulb or light-emitting diode.

This flashlight must be pumped continuously during use, with the flywheel turning the generator between squeezes to keep the light going continuously. Because electrical power is produced only when the handle is squeezed, switches are not needed. Dyno lights were issued to German Wehrmacht soldiers during the Second World War and were popular in Europe during the war because the electrical power supply to homes was not very reliable.

Lights up darkness even after years of abuse and neglect. Utilizes a Panasonic 1.5 farad gold film capacitor allowing operation for years without any maintenance. Holds electrical charge for as long as a month. This flashlight is very unique and is intended as an emergency light of just around 15 lumens which will be just enough to get you out of a bad situation. A reliable Survival Flashlight.

Each one of these Emergency Flashlights has its own ratio of charge time to runtime, which can be summarized as the time that a flashlight needs to reach full charge versus the amount of time that it will run with a full charge. Those will vary based on the type of input (USB, crank, or solar) and the type of output according to its’s (brightness). How Do Solar Powered Flashlights Work?